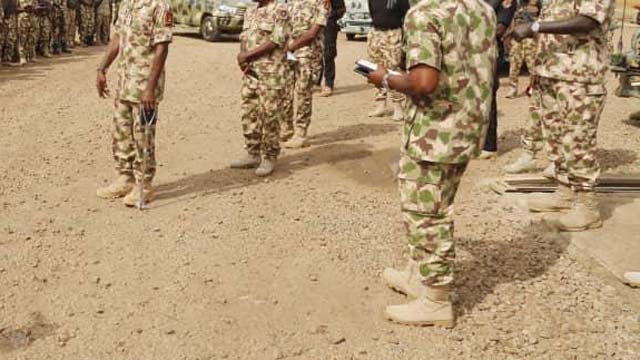 The Defence Headquarters (DHQ) has said its troops, in a sustained air bombardment, have killed a good number of Islamic State’s West Africa Province (ISWAP) fighters around the fringes of Lake Chad in the North East.

Coordinator of the Defence Media Operations (CDMO), Maj-Gen. John Enenche made the disclosure in an update released to the media in Abuja yesterday.

The CDMO said the terrorists were neutralised by Operation Lafiya Dole on Saturday at Kolloram, on the fringes of the Lake Chad in Borno.

“The operation was conducted based on credible intelligence indicating that some of the ISWAP leaders and fighters had converged in the settlement for a meeting.

“Accordingly, Nigerian Air Force (NAF) fighter jets and surveillance aircraft were scrambled to attack the location. Overhead the target area, the terrorists were seen moving towards the edges of the settlement and were engaged, leading to neutralisation of many of them.

“The few survivors were taken out in subsequent passes as the jets strafed the area,” Enenche said.

He assured that the Nigerian armed forces, in furtherance of the objective of restoring peace and security in the North East, will intensify offensive operations against the enemies of the nation.

In the same vein, a joint military operation in Katsina State has left many bandits dead, while five abducted persons were rescued.

According to a statement by the Director Press to the Secretary to the State Government (SSG), Abdullahi Yar’Adua, the operation took place at the Katsina/Zamfara border forest on Friday.

The SSG, the statement added, confirmed the incident when he received the kidnap victims from the representative of the Commander, 17th Brigade, Katsina.

The three females are Hauwa’u Lawali (13), Khadija Rabe (13) and Sumayya Rabe (10), all of Karamne village in Madarumfa region of Niger Republic.

Narrating their ordeals, the two men said they were kidnapped in their farms while the girls said they were hawking onions in Gurbi, a neighbouring town to Zamfara State when the bandits whisked them away.