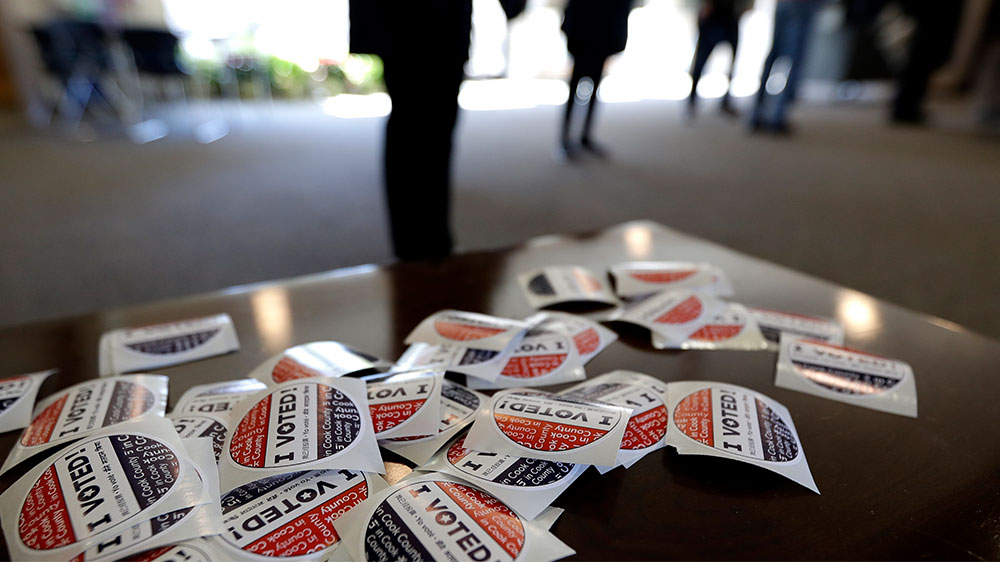 ‘I Voted’ stickers on the table for voters after they cast their ballots at a church in Evanston, Illinois during that state’s primary election in March [File: Nam Y Huh/AP Photo]

President Donald Trump said on Monday that he has no intention of trying to win re-election by using the coronavirus outbreak as an excuse to delay the presidential vote in the United States scheduled for November 3.

Talk that he might try to push back the date of the election was, he said, “made-up propaganda” by the campaign of his presumptive Democratic rival for president, Joe Biden.

“I never even thought of changing the date of the election. Why would I do that? November 3. It’s a good number. No, I look forward to that election,” Trump told reporters at the White House on Monday.

Trump was responding to comments by Biden during an online campaign event last week. Biden claimed the incumbent would “try to kick back the election somehow, come up with some rationale why it can’t be held”.

“That’s the only way he thinks he can possibly win,” Biden said.

Another prominent Democrat, political operative Jeff Weaver, who advised US Senator Bernie Sanders’s 2020 run for the presidency, said more of the same on Monday after New York became the first state to cancel its June presidential primary.

Trump, “now has a precedent [to postpone the national election] thanks to New York state,” Weaver said in a statement issued by the Sanders campaign.

Our campaign statement on the New York State Board of Elections decision to cancel the state’s presidential primary: pic.twitter.com/BzylNaqCaS

Despite the fearmongering, however, such a prospect is all but impossible.

The power to change the date of a presidential election rests – per the US Constitution – with the US Congress, and not the executive branch headed by the president. Congress could conceivably delegate its authority to determine the “Times, Places and Manner of holding Elections” to the President by changing the law, but both the US Senate and House of Representatives would need to approve it.

Trump and the Republicans hold power in the Senate, but the House is controlled by Democrats, and House Speaker Nancy Pelosi is bitterly opposed to Trump, so there is practically zero chance of that happening.

Even if Trump and Congress postponed the date of the election, they could not do so indefinitely. The Constitution’s 20th Amendment establishes an end date for the presidential term – noon on the 20th day of January. So unless he is duly re-elected before then, Trump is out of a job on that date.

Changing the start date of the next term would require a constitutional amendment, a process that begins only with a proposal by two-thirds of the House and Senate or a constitutional convention called for by two-thirds of the state legislatures. A new amendment would then need to be approved by three-quarters of the state legislatures. All before January.

Only one constitutional amendment – the 18th Amendment, which established a prohibition against the production and sale of alcohol in 1919 – was later repealed by the states.

The dueling campaign rhetoric over delaying the election masks a more practical underlying policy dispute. Democratic leaders want to enable broader use of mail-in ballots in the November election. Trump opposes expanded use of mail ballots, suggesting that voting by mail is subject to fraud.

Congress included $400m for states to bolster mail-in ballots and early voting as part of the $2.2 trillion coronavirus rescue bill. Decisions on what kind of ballots to allow are up to the states.

So, despite what may be circulating on social media or being bandied about by Democrats, the 2020 US presidential election is going forward – one way or another.