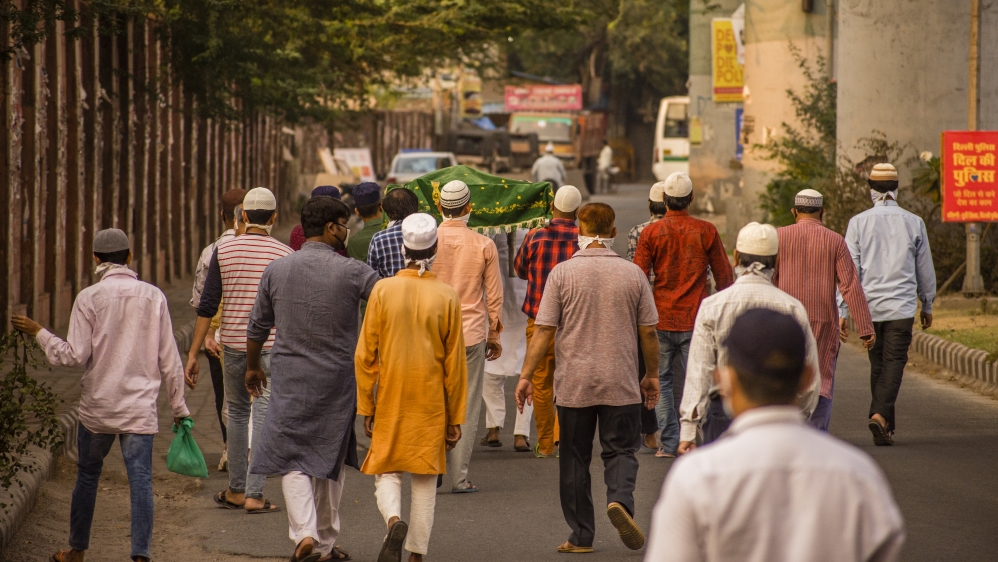 Izhar Ahmad has completed almost a month under quarantine, double the period he was supposed to be in the government isolation ward in the Indian capital, New Delhi, but he wonders why has he still not been allowed to go home.

“It has been almost a month and three coronavirus tests done on me which came out negative, but I am still here in this centre, not allowed to meet my family or friends,” Ahmad, 40, told Al Jazeera from the quarantine centre in Delhi’s Wazirabad area.

Ahmad is among thousands of members of a Muslim missionary organisation, Tablighi Jamaat, who were quarantined across the country, after a Jamaat event in Delhi they attended in early March was linked to coronavirus infections.

Since then Jamaat members have been subjected to a hostile media campaign with Hindu far-right groups accusing the Muslim community of spreading the virus, which has killed more than 200,000 people worldwide.

#CoronaJihad trended on Twitter, with many ruling Bharatiya Janata Party (BJP) leaders calling the religious gathering “corona terrorism” – a term many said hinted at the Islamophobia of the governing party.

Ahmad, 40, who was picked up by police on April 1 from Shastri Park in eastern Delhi, said four to six people were being housed together in makeshift rooms with a lack of fans, making conditions “stuffy and humid”.

He also expressed frustration over the lack of food for suhoor (the pre-dawn meal during Ramadan) and iftar (Muslims break their fast at sunset with a meal called iftar), making it difficult to observe the fast during the holy month.

“They don’t provide food at the time of suhoor and when it’s time to break our fast, we are given dates and two bananas,” he told Al Jazeera.

“We want to go home, there is no reason for them to keep us here, especially when I have been tested negative three times.”

Ibrahim Sultan, who is at the same camp, said he had twice tested negative. “They have taken another test and I am awaiting results,” he said.

“I want to go back to my family if I don’t have corona, we are just waiting here in these poor conditions and it’s getting difficult for us in the time of Ramadan.”

In a letter to Delhi Health Minister Satyendar Jain, Khan also claimed that facilities for food and medicines at the camps were poor and needed attention.

Earlier this month, two people associated with Tablighi Jamaat died at the Wazirabad quarantine centre, according to local media reports. They were suffering from diabetes and were allegedly not provided with food on time.

“It has been 28 days that these people are still in quarantine centres, they are not giving any reason on why they are not being released,” Khan told Al Jazeera, adding that Jain has replied to none of his letters.

“After our intervention, some fans were provided in the camps and sufficient food.”

Al Jazeera tried to contact Health Minister Jain and several other leaders of the Aam Aadmi Party (AAP), which governs in Delhi, but could not reach them. One AAP leader, who wished to remain anonymous, dubbed the accusation of poor conditions in quarantine centres as a “lie”.

Despite enduring a vilification campaign, more than 200 Jamaat members who have recovered from COVID-19 have volunteered to donate plasma for the treatment of other patients.

This came after Jamaat head Muhammad Saad Kandhlawi, who is facing criminal charges for organising the March gathering in Delhi, released a statement on Tuesday, requesting Jamaat members donate their blood plasma.

The plasma can only be collected from people who have tested positive and later recovered. Some doctors say people who have recovered from the virus may develop antibodies in their blood, called convalescent plasma, that could be used to fight the disease, although some scientists refute this.

Jamaat has now been hailed by some media as “super savers”, weeks after being called “super spreaders”.

“I donated plasma today [Wednesday] as I want to help find a cure for this unforgiving virus and help people who are suffering from it,” Abdul Manan told Al Jazeera.

“If this is the way to help our country in fighting the virus, I am happy to do it several more times if required.”