‘We can’t keep our country closed for the next five years. You could say there might be a recurrence and there might be,’ Trump said, when pressed about his decision to decommission the task force within weeks that has provided advice during the coronavirus pandemic.

He also is not ruling out a 2nd wave of the pandemic, as medical experts are warning could happen.

‘It’ll be a flame and we’re going to put the flame out,’ Trump said.

Trump said he would continue to get ‘advice’ from medical experts, including two prominent members of the task force: Dr. Anthony Fauci and Dr. Deborah Birx.

‘They will be and so will other doctors and so will other experts in the field.’ But he struggled to articulate why the task force had to go in order for the country to reopen – something he says must be achieved immediately.

‘We have a great country. We can’t keep it closed.’ 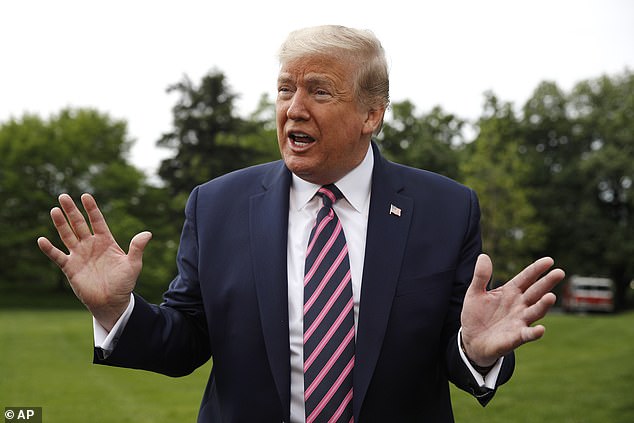 The administration is planning to wind down its coronavirus task force, according to a report. The U.S. had more than 70,000 deaths with more than 1.2 million infected

He also issued another optimistic economic prediction – but this time put the action in the fourth quarter, rather than a third quarter this summer which he predicted would see a boom.

Members of the White House coronavirus task force that has drawn worldwide attention amid the outbreak are being told it is ‘winding down’ even as the number of U.S. deaths and infections are projected to rise.

The task force, which was put under the domain of Vice President Mike Pence only to have President Donald Trump take over signature press briefings, has been meeting for months as the outbreak spread and U.S. deaths have climbed.

The U.S. had more than 70,000 deaths with more than 1.2 million infected, and no sign yet that the pandemic is under control.

Vice President Mike Pence confirmed the group was disbanding in a briefing with reporters at his Washington office.

‘We’re having conversations about that,’ Pence said, confirming a report in the  New York Times.

Asked about the task force he heads being disbanded, Pence responded: ‘I think we’re having conversations about that and about what the proper time is for the task force to complete its work and for the ongoing efforts to take place on an agency-by-agency level. And we’ve already begun to talk about a transition plan with FEMA.’

‘But it’s – it really is all a reflection of the tremendous progress we’ve made as a country,’ he continued. ‘The President stood up the White House Coronavirus Task Force to marshal – in January – to marshal a national response.’

Asked if task force coordinator Dr. Deborah Birx, who was with him at the briefing, would be sticking around, Pence responded: ‘We’re going to keep Dr. Deborah Birx around every bit as long as we need to.’

Pence indicated the task force could be finished within weeks.

‘I think we’re starting to look at the Memorial Day window, early June window as a time when we could begin to transition back to having our agencies begin to manage — begin to manage our national response in a more traditional manner,’ he said.

Then Dr. Birx indicated available data would be a factor.

‘We’ll still keep a close eye on the data because we have very good data now. It took us a while to build that capacity. And we’ll make sure that, you know, we’re watching that at a federal level.’

It was not clear if another panel would replace it. A senior aide to Pence, Olivia Troye, has told task force officials to wind down there work ‘within weeks,’ according to the Times.

That would put it out of commission just as models show U.S. infections and deaths cresting.

The task force met Tuesday at the White House, according to Pence’s public schedule, but it didn’t meet Monday or Saturday. He made the comments while President Trump was en route to Arizona, where he was to tour a factory manufacturing face masks to protect medical professionals and protect Americans amid the pandemic. 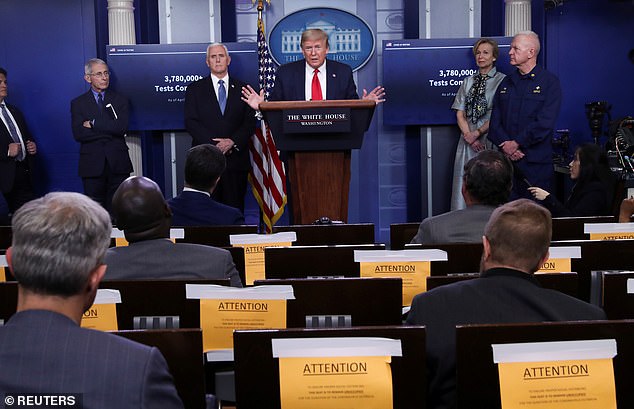 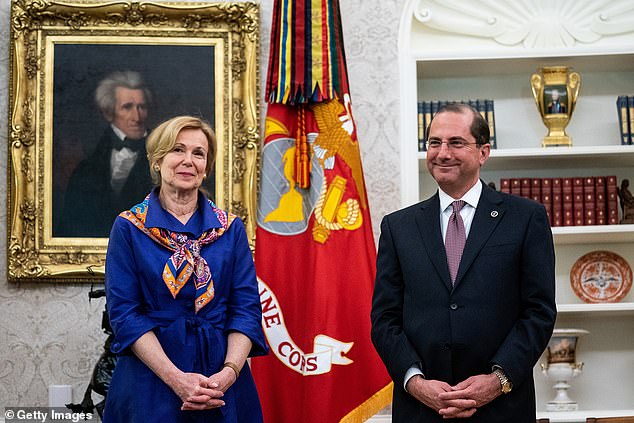 White House coronavirus task force coordinator Dr. Deborah Birx (L) and Health and Human Services Secretary Alex Azar attend an announcement that the Food and Drug Administration issued an emergency approval for the antiviral drug remdesivir in the Oval Office at the White House May 01, 2020 in Washington, DC. Azar previously ran the task force before Pence was put in charge 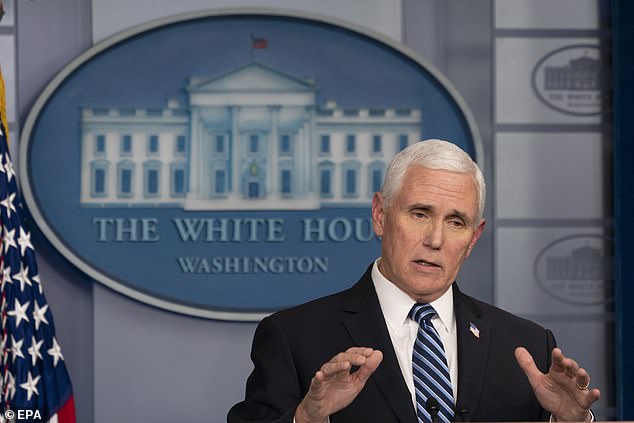 Vice President Mike Pence speaks during a news briefing with members of the Coronavirus Task Force at the White House, in Washington, DC, USA, 24 April 2020. He confirmed the task force he heads may be disbanding 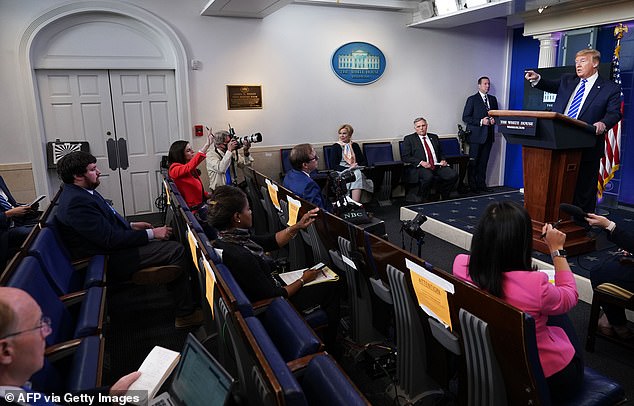 Response coordinator for White House Coronavirus Task Force Deborah Birx sits next to Department of Homeland Security’s Under Secretary for Science and Technology William N. Bryan as they listen to US President Donald Trump speak during the daily briefing on the novel coronavirus, which causes COVID-19, in the Brady Briefing Room of the White House on April 23, 2020, in Washington, DC

Trump has scaled back his own press briefings with the task force. In prior weeks, the events would sometimes expose apparent rifts between the president and the nation’s top experts. Reporters asked Fauci if he agreed with Trump’s touting of hydroxychloroquine as a treatment. And the president himself quizzed coronavirus coordinator Dr. Debbie Birx on the idea of injecting disinfectants into coronavirus patients.

With more and more movement toward reopening, Trump also on Tuesday mischaracterized two new reports that show an increased number of deaths from the coronavirus, a troubling sign of what may come as he pushes the country to reopen.

‘It’s a report with no mitigation,’ the president said at the White House of two new studies – based on government modeling – that show the daily virus death toll will hit 3,000 by June and another projects that over 134,000 people will die.

‘We’re doing a lot of mitigation,’ Trump said. ‘But that report is a no-mitigation report, and we are mitigating.’

The reports, however, do factor in mitigating along with changes that will come as states slowly start to reopen. Additionally, there is less mitigation taking place in the United States as businesses start to reopen, parks and beaches start to see crowds, and people begin to return to their normal routines.

Trump told reporters at the White House Tuesday: ‘We did everything right. But now it’s time to go back to work.’ 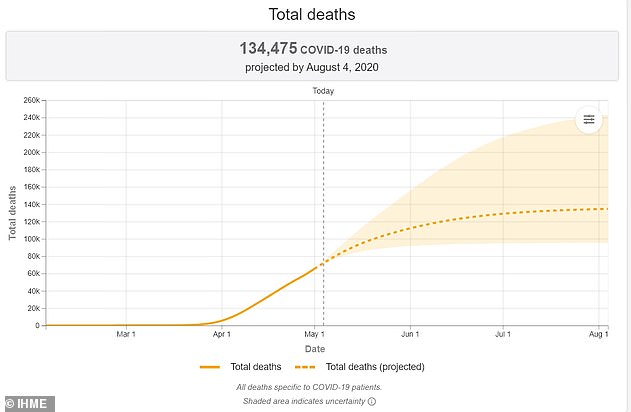 A revised coronavirus model has doubled its predicted US death toll to nearly 135,000 by August as social-distancing measures are increasingly relaxed across the country 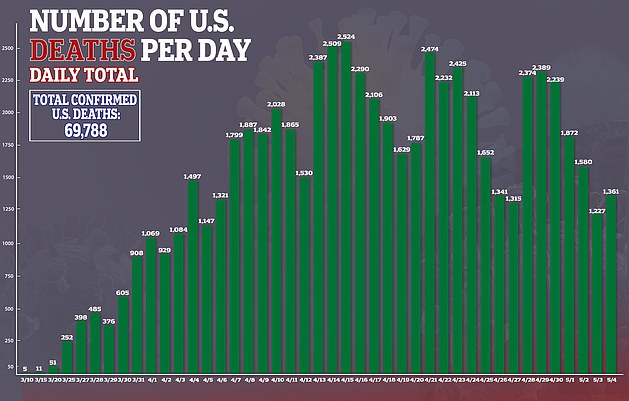 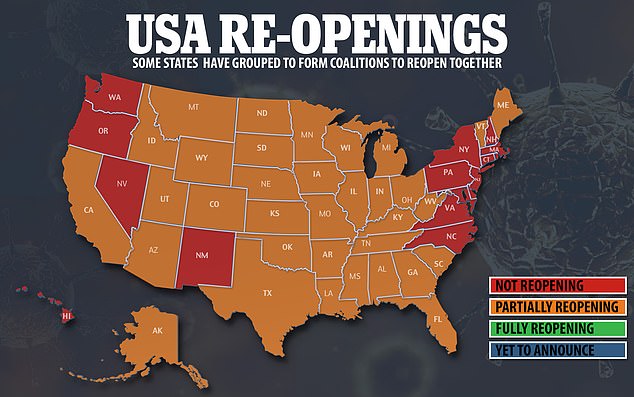 A newly revised coronavirus model has doubled its predicted US death toll to nearly 135,000 by August as social-distancing measures for quelling the pandemic are increasingly relaxed across the country.

Researchers say the ominous new forecast from the University of Washington’s Institute for Health Metrics and Evaluation reflect ‘rising mobility in most US states’ with an easing of business closures and stay-at-home orders expected in 31 states by May 11.

The projections reinforced warnings from public health experts that a rising clamor to lift restrictions on commerce and social activities – in hopes of healing a ravaged economy – could exact a staggering cost in terms of human lives.

So far in the US, the number of infections has increased to more than 1.2 million and nearly 70,000 Americans have died from COVID-19.

Some California counties had already announced they would reopen in defiance of the state’s ongoing stay-home order.

Newsom said some businesses in the state will receive permission to reopen with restrictions. The phased-in plan allows clothing stores, sporting goods, florists and other retailers to resume operations with curbside pickup. Dining in at restaurants and office reopenings are still prohibited.

The Happy Viking Sports Pub and Eatery in Yuba opened its doors to the public for the first time in 50 days on Monday after county officials ruled that restaurants, retail stores and fitness centers could open if patrons and staff obeyed social distancing rules.

In the Southern California community of Victorville in San Bernardino County, gym owner Jacob Lewis re-opened his business on May 1, without waiting for either state or county officials to give him the green light.

California is one of about two dozen U.S. states that still have strict coronavirus restrictions in place.

At least 100 million Americans were in states that have already made assertive moves to reopen or had no stay-home orders to begin with.

States home to more than 210 million were taking more gradual steps with partial reopenings or didn’t appear close to reopening at all like epicenter New York.

In New York, the state that accounts for about a third of all US infections, Governor Andrew Cuomo on Monday outlined plans to ease restrictions on a regional basis.

Without giving a specific time frame, Cuomo told a daily briefing that construction, manufacturing and the wholesale supply chain would be allowed to start up under the first phase of a four-step return to normality.

Florida began a gradual restart of its economy on Monday. In the first phase, retail merchants and restaurants will open, with indoor patronage limited to 25% of capacity. Eateries are also allowed to open outdoor seating with social distancing, and medical practices can resume elective surgeries and procedures.

In Ohio, Governor Mike DeWine was allowing construction and manufacturing to reopen on Monday, and letting office workers return.