President Donald Trump on Wednesday blamed ‘rich guys’ playing the market for the up and down swings among stocks as the U.S. economy struggles to right itself in the wake of the coronavirus.

‘When the so-called ‘rich guys’ speak negatively about the market, you must always remember that some are betting big against it, and make a lot of money if it goes down. Then they go positive, get big publicity, and make it going up. They get you both ways. Barely legal?’ the president wrote on Twitter.

Trump did not name any specific investors but his tweet follows comments from legendary investor and billionaire hedge fund manager Stanley Druckenmiller, who said the stock market was being historically overvalued and called hopes of a rapid recovery a ‘fantasy.’ 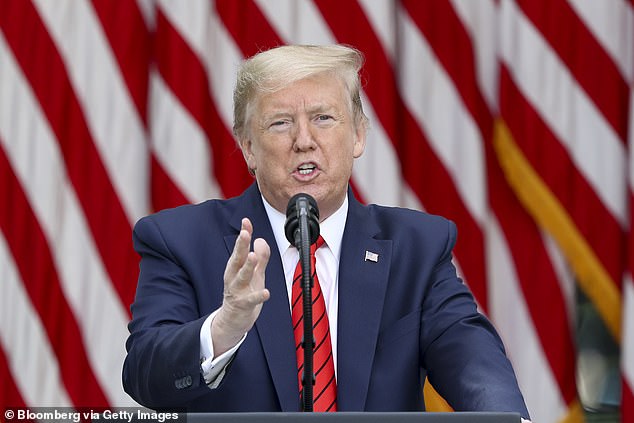 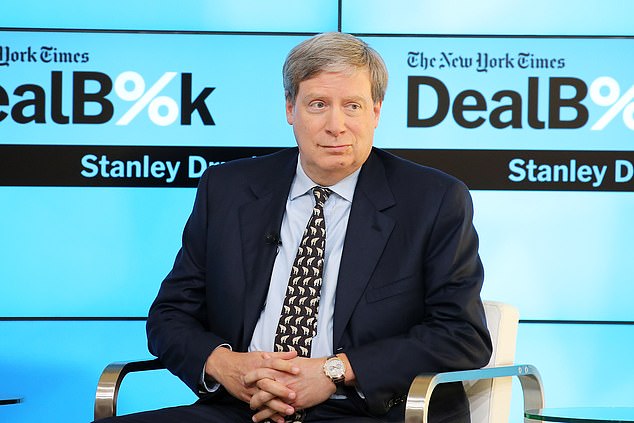 President Trump did not name names but his tweet follows comments from billionaire investor Stanley Druckenmiller, who said hopes for a quick economic recovery are a ‘fantasy’

The tweet also followed CNBC’s Jim Cramer’s criticism of billionaires for betting against the stock market.

‘I’ve had it with these billionaires,” Cramer said Wednesday on CNBC’s “Squawk on the Street.”

Druckenmiller minced no words in his thoughts on the economy during a speech to the Economic Club of New York on Tuesday evening.

‘The risk-reward for equity is maybe as bad as I’ve seen it in my career,’ Druckenmiller said, according to CNBC. ‘The wild card here is the Fed can always step up their (asset) purchases.’

‘The consensus out there seems to be: ‘Don’t worry, the Fed has your back,’ he noted. ‘There’s only one problem with that: our analysis says it’s not true.’

Druckenmiller also said a v-shaped recover, which is a sharp decline followed by a sharp recovery – which the Trump administration is pushing for – is a ‘fantasy.’

‘I pray I’m wrong on this, but I just think that the V-out is a fantasy,’ he said, according to Bloomberg News.

Druckenmiller, who made billions in the market as chairman and CEO of the Duquesne Family Office, also said he thought the stock market overreacted to news of possible antiviral drugs, such as Gilead’s remdesivir.

‘I don’t see why anybody would change their behavior because there’s a viral drug out there,’ he said.

The Economic Club of New York is one of the city’s oldest and wealthiest private clubs.  And Druckenmiller has not been the president’s biggest supporter. He said last year that Trump got lucky in winning the 2016 election.  He has an estimated net worth of $5.8 billion.

Trump, meanwhile, has touted remdesivir, which the FDA approved for emergency use on coronavirus patients in hospitals as he pushes the United States to get the economy reopen ahead of the November election.

The president is banking his 2020 re-election campaign on a strong U.S. economy.

Gilead’s chief executive officer Daniel O’Day joined President Trump in the Oval Office for the announcement in early May and pledged to donate 1.5 million doses of the drug.

The stock market has mostly recovered from its historic lows in March, when the coronavirus began to make waves across the United States, shuttering businesses and causing unemployment numbers to rise.

Goldman Sachs, however, warned on Wednesday that dark economic days are ahead.

Analysts at the firm estimated unemployment will peak at 25% rather than the 15% it was anticipating previously, according to Forbes.

Goldman also revised down its GDP forecast: it’s now expecting GDP to plummet 39% in the current quarter, instead of the 34% previously predicted.

The US economy lost 20.5 million jobs in April with the unemployment rate spiking to 14.7 percent, the steepest plunge since the 1930s Great Depression.

Powell said: ‘The scope and speed of this downturn are without modern precedent, significantly worse than any recession since World War II.

‘We are seeing a severe decline in economic activity and in employment, and already the job gains of the past decade have been erased.

‘This downturn is different from those that came before it.’ 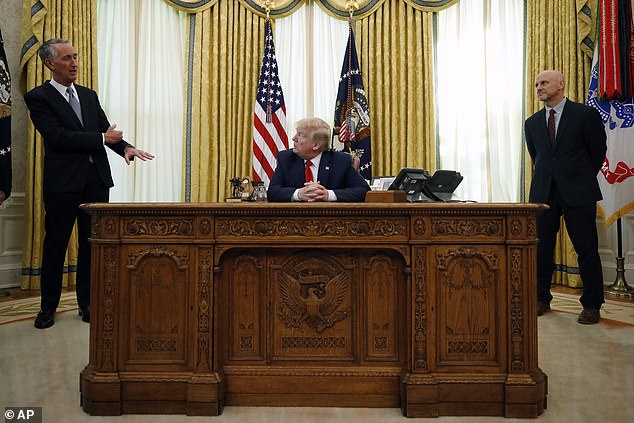 Daniel O’Day (left), CEO of Gillead Sciences Inc, said his company would donate 1.5 million doses of the drug during the May 1 announcement with President Trump and  Stephen Hahn, commissioner of the Food and Drug Administration 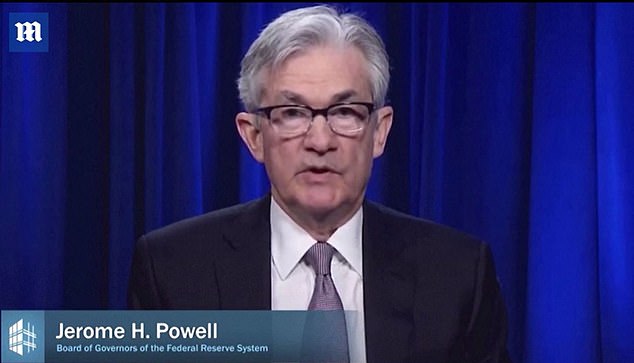 Federal Reserve Chair Jerome Powell provided a bleak outlook for the U.S. economy in remarks Wednesday and urged Congress and the White House to act further to offset the damage from the viral outbreak

On Tuesday, Speaker Nancy Pelosi proposed a $3 trillion aid package that would direct money to small businesses, state and local governments and other beleaguered institutions suffering in the wake of coronavirus outbreak.

This money would come on top of roughly $3 trillion in earlier financial assistance that the government has provided. The Fed also has intervened by slashing interest rates to near zero and creating numerous emergency lending programs.

But administration officials have said they want to see how previous aid packages affect the economy. And Congressional Republicans have made clear they oppose Pelosi’s new legislation, which the House could vote on as early as Friday.