A German state has announced plans to lift the lockdown entirely from June 6, as the country’s coronavirus cases and deaths fell to a new low today.

The eastern state of Thuringia plans to replace lockdown measures with ‘recommendations’ and take stricter action at local level if necessary.

But the move has drawn criticism from other German officials who called it a ‘dangerous experiment’ and ‘premature’.

Germany recorded only 289 cases and 10 deaths on Sunday, figures which may be affected by weekend backlogs but are lower than last week’s numbers.

The country’s closely-watched R rate has remained below 1.0 for nearly two weeks, meaning the epidemic is in retreat. 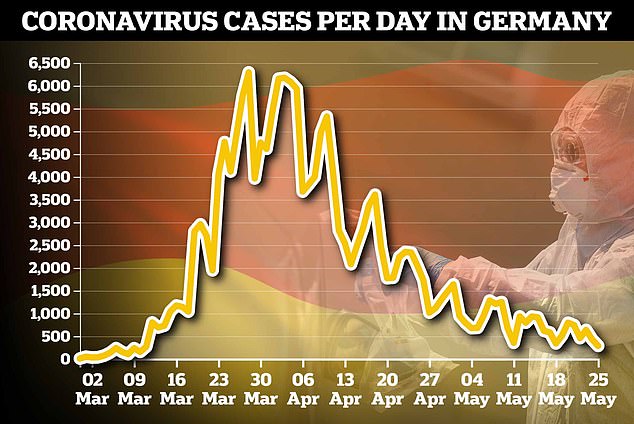 Germany’s daily coronavirus cases fell to only 289 yesterday, the lowest since March 11 – a figure possibly affected by weekend delays but still lower than previous weekends 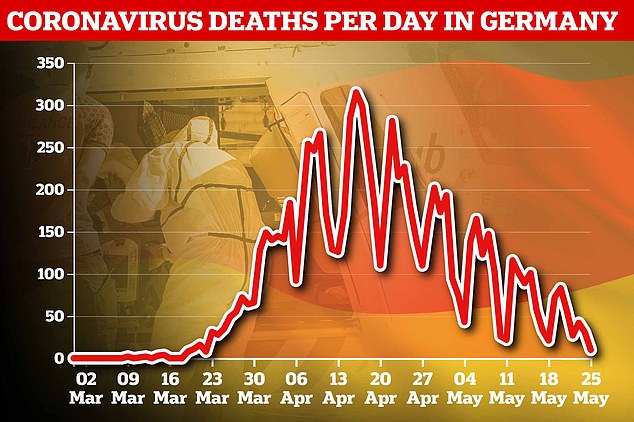 This graph shows the daily number of deaths, with only ten recorded yesterday – the lowest figure since March 22

Thuringia has seen only 2,871 cases and 152 deaths since the pandemic began, making it one of Germany’s least-affected states.

State premier Bodo Ramelow said lockdown measures would be replaced with ‘a concept of recommendations and fighting Covid-19 locally if infection figures rise’.

Masks would not be compulsory under the new rules and a 5ft safety distance would be recommended rather than enforced.

Thuringia had already started re-opening hotels and restaurants, and the new rules would allow local authorities to set their own rules.

The threshold for re-imposing lockdown measures would be set at 35 new infections per 100,000 people per week, lower than the national threshold of 50.

The proposals have already drawn comparisons with Sweden, which has never imposed a lockdown.

Germany has been widely praised for a relatively successful response to the pandemic, leading to fewer deaths than in Britain, Italy, France or Spain.

But Angela Merkel has repeatedly urged caution and officials in other states have lined up to criticise Thuringia’s plans. 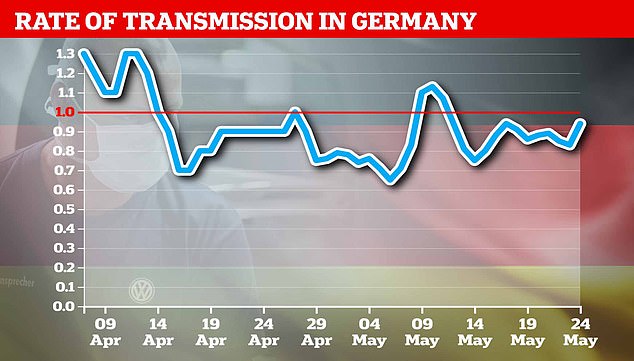 Germany’s closely-watched rate of transmission (R), which shows how many people each virus patient infects on average, has remained below 1.0 since May 12 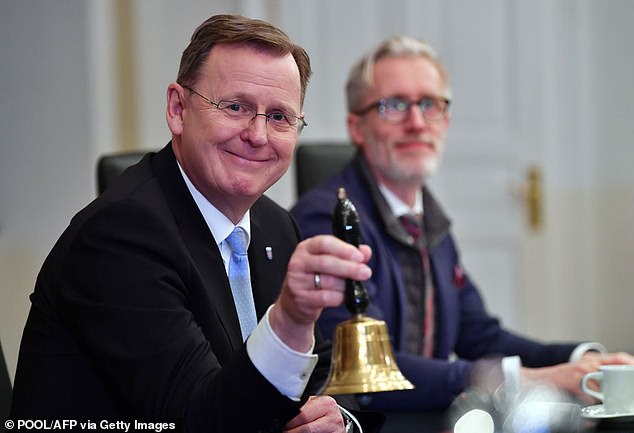 It’s not clear exactly how it would work yet but Ramelow’s idea centres on taking action in individual cities or countries if they report 35 new infections per 100,000 inhabitants within a week.

That’s a lower threshold than the 50 which is currently the national standard.

He said that he would place his trust in people’s ‘sense of responsibility for themselves’, The Times reported.

The chief of staff to the leader of Bavaria said his government was ‘appalled’ and bluntly rejected Ramelow’s idea.

Florian Herrmann told German newspaper Bild: ‘Thuringia’s plans are a highly dangerous experiment for everyone in this country.

‘Lifting all protective measures comes too soon and isn’t appropriate in the current situation, because the virus hasn’t yet been defeated.’

Saarland governor Tobias Hans told Die Welt that even as restrictions are loosened ‘we still need rules set by the state so that imperatives of caution are complied with, to avoid regional lockdowns and high death rates.’

The interior minister of Mecklenburg-Western Pomerania, Lorenz Caffier, told another paper: ‘I think a complete, fast loosening is premature.’

There was also criticism from the mayor of Jena, one of the largest cities in Thuringia, where authorities pioneered compulsory mask-wearing. 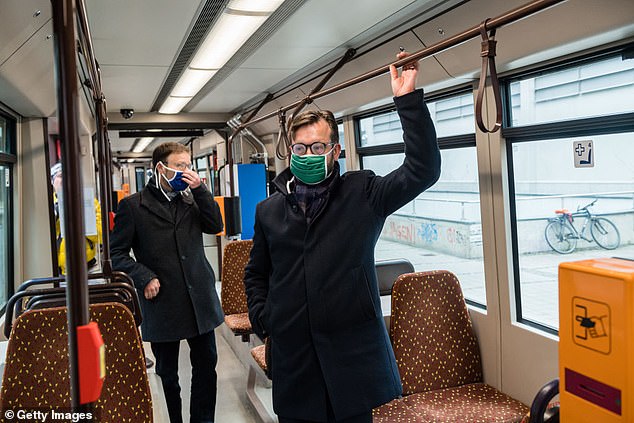 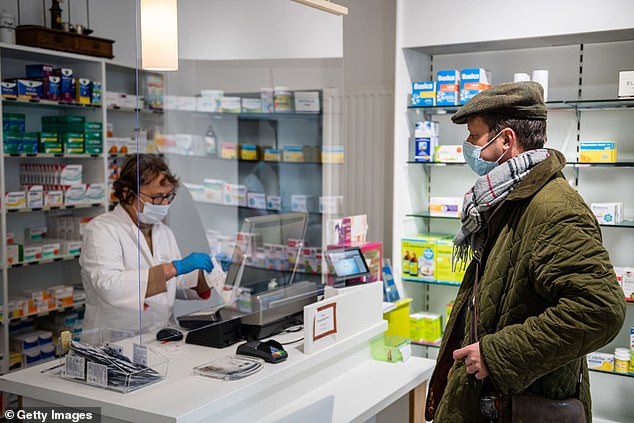 ‘People will clearly continue to need clarity, safety and orientation with rules on hygiene, social distancing and limiting contacts,’ she said.

All 16 states currently have coronavirus rules including physical distancing requirements and an obligation to wear masks on public transport and in shops.

Thuringia’s new approach would raise pressure on other states to ease their lockdowns further.

Lockdown measures in other states will continue to be eased on a less radical scale with schools, bars, restaurants, hotels, gyms and swimming pools set to reopen.

Outbreaks at several slaughterhouses have recently caused concern, along with infections at a restaurant in the country’s north-west.

There were also 100 new infections after a single Baptist service in Frankfurt last Sunday. 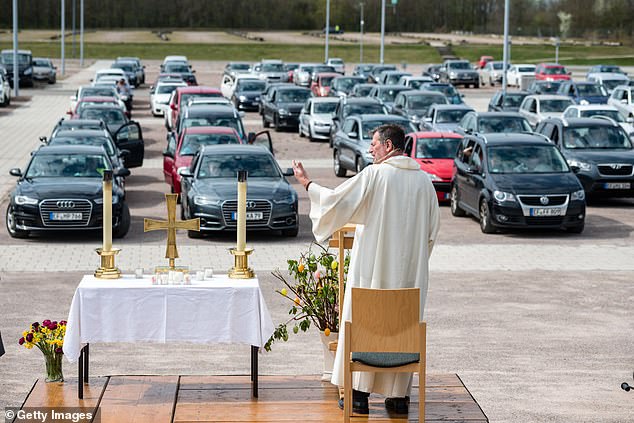 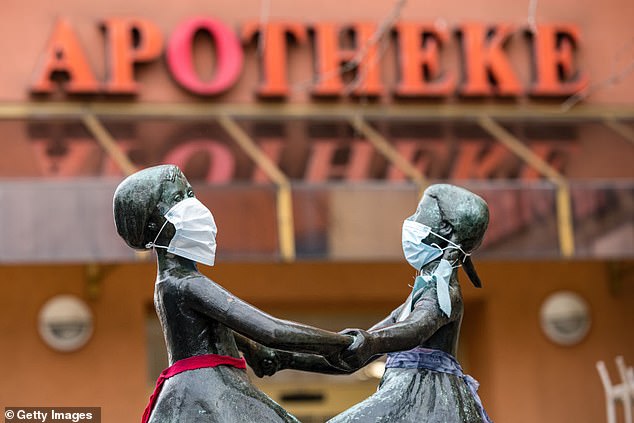 Germany now has a total of 178,570 cases and 8,257 deaths from the pandemic, with Bavaria accounting for the largest number of each.

The R rate rose yesterday to 0.94, meaning that 100 virus patients will infect another 94 people on average.

The rate has been estimated below the 1.0 threshold every day since May 12 and all but three days since April 28.

Merkel has warned that even a small increase above 1.0 could leave Germany’s hospitals overwhelmed.

Today’s 289 new cases are the fewest since March 11, lower than the 342 infections added to the tally last Monday morning.

Germany recorded only 10 new deaths in the last 24 hours – compared to last week’s 21 – in the smallest increase since March 22.