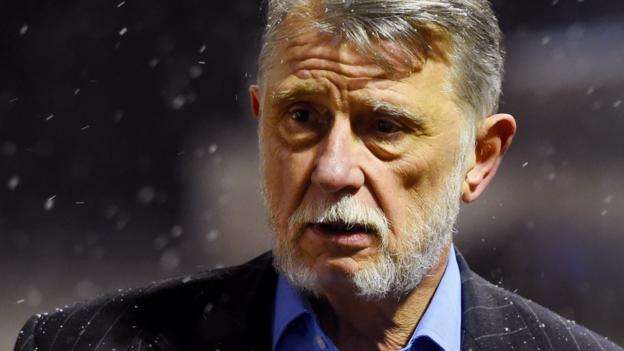 The Tynecastle club want a 14-14-14 SPFL set-up for the next two seasons – a move that would spare them relegation from the Scottish Premiership.

But Cowdenbeath are one of four sides in the bottom two tiers who have told BBC Scotland they will vote against it.

Should two more join them – and Forfar Athletic, Peterhead, and Elgin City – the new plan would fail in any ballot.

While he did not declare his club’s position, Stenhousemuir chairman Iain McMenemy said on Wednesday the proposal was doomed to failure. The move would also deny Cove Rangers promotion from the bottom tier.

Hearts must gain the support of 15 of the 20 clubs in the bottom two divisions, as well as 11 of the 12 Premiership sides and seven of their nine Championship rivals.

Findlay says he would have more sympathy for the Edinburgh outfit – and chair Ann Budge – if they admitted the plan was about saving themselves.

“This is all about Hearts not preparing to accept relegation,” he told BBC Scotland.

“There are not new proposals, they don’t address anything new, and they have already been rejected.”

Budge was the co-chair of a reconstruction group whose plans faltered earlier in May after top-flight clubs indicated they would not support them in a ballot.

And Findlay suspects that a series of individual divisional meetings next week will come to a similar conclusion.

“I am not opposed to having league reconstruction talks in the future, but it would have to involve a reorganisation of Scottish football, with a fairer financial model,” he said. “That would lead to better competition and a better product.”