Three mothers are considering suing the Government over school closures – amid claims they may have breached children’s human rights.

The women have also written to the Secretary of State Gavin Williamson to ask whether the ‘long term physical and mental welfare’ of pupils has been considered, and to raise concerns about social distancing.

Campaigner Christine Brett, who has two children, said: ‘These are healthy children who have been quarantined for 12 weeks – they shouldn’t be treated like they’re germs, disinfected on entry and separated on to individual tables.’

Schools are set to return on Monday for the first time since March 20 – after being closed down because of the coronavirus. 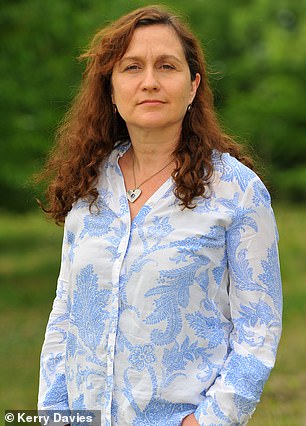 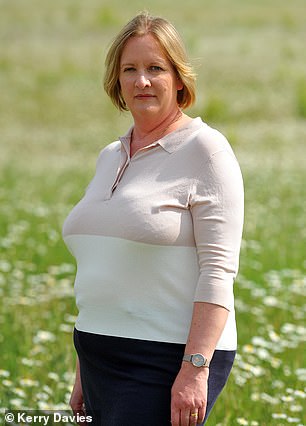 But this will only be for select year groups and with strict social distancing measures in place. Some councils have also blocked re-opening for now.

The three mothers launched the ‘Us for Them’ campaign on behalf of parents who say they were made to feel like pariahs by admitting they disagreed with children being kept at home because of Covid-19.

Founders Molly Kingsley, 41, Liz Morris, 46, and Mrs Brett, 48, all from Cambridgeshire, have one child each returning to school and another still stuck at home.

They claim ‘overwhelming evidence’ that lockdown is having a devastating impact on children’s wellbeing may have been overlooked.

They also fear draconian social distancing rules, planned for when schools return, could cause long-term mental damage to children.

The wellbeing of children must be taken into account in the government’s decision-making, they say.

The scientific advisory group, known as Sage, said the risk of children catching the virus while back at school was ‘very, very small, but it is not zero’. It also found there was not a higher risk to teachers of being infected compared to other adults going back to work.

The mothers’ group, which was formed when they met onlne, is also arguing against extreme social distancing rules, such as toddlers being banned from playing with soft toys, which could be implemented when children return.

Such measures may contravene the UN Convention on the Rights of the Child (UNCRC), which states the best interests of the child must be the primary consideration, they say.

Almost 2,000 parents and teachers who previously feared speaking out in support of a return have rallied behind the campaign.

Many parents are now too scared to admit they want to send their children back to school after unions opposed the reopening of classrooms next week, according to Mrs Kingsley.

The group has been ‘deluged’ with messages from parents, teachers, and even psychologists thanking them for their bravery in starting the campaign, she said.

The former lawyer, who has two daughters aged three and six, said: ‘We’ve had so many private messages of support – from parents who have felt unable to speak out on their school WhatsApp groups or Facebook groups for fear of a backlash.’ The lobbying group has written an open letter to the Education Secretary asking to know what investigations were done into the impact on children’s mental and physical welfare when guidance was drawn up.

They also ask why views of parents and experts on children’s welfare appear not to have been considered. 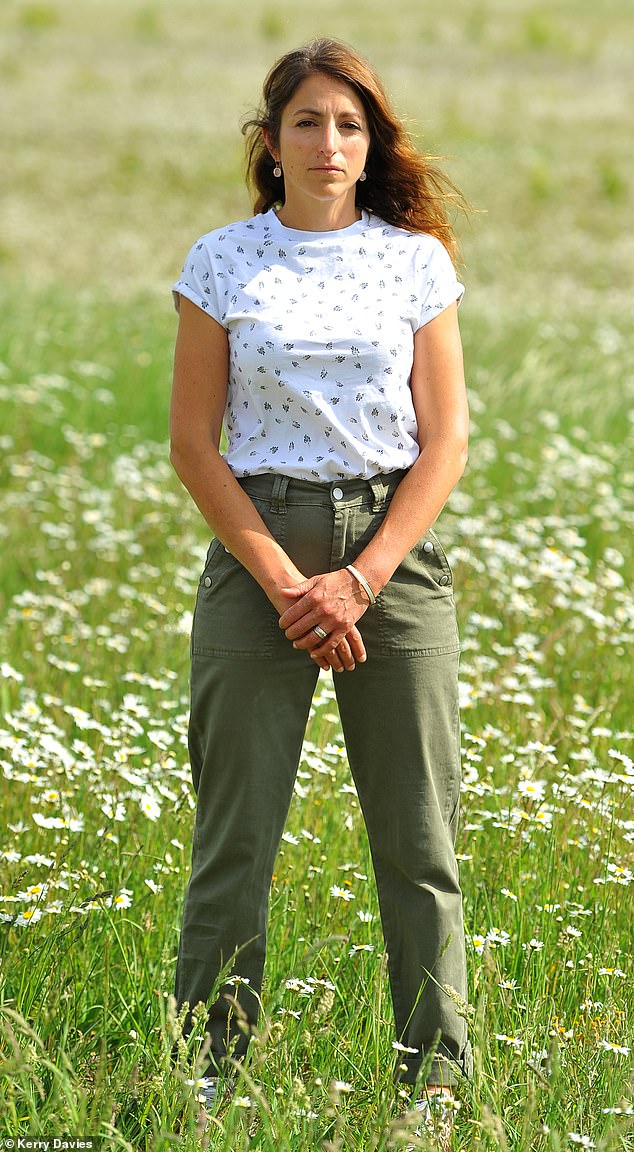 The letter adds: ‘We absolutely recognise the challenges for Government at this time but your policies cannot – morally or legally – subordinate the welfare of children to other interests.’ They have instructed a team of lawyers – including a leading human rights QC – to examine whether the government’s actions so far and the distancing proposals may have been unlawful.

‘The risk of transmission between children is minimal, according to the experts, whereas the risk of the damage to their wellbeing is high.

‘Parents have very much been led and frightened by the risk of the virus. But this fear is stopping them from being rational about what this is going to look like for their children going back to school.’ ‘These are healthy children who have been quarantined for 12 weeks – they shouldn’t be treated like they’re germs, disinfected on entry and separated on to individual tables.

‘Most of us would see that as a punishment, but they haven’t done anything wrong. How is that going to make them feel?,’ she added.

The mums regard the social distancing rules, planned for when schools and nurseries re-open, as draconian.

Mrs Brett said: ‘Children are social beings and it’s really worrying that instead of going back to a supportive environment where they can actually recover from what’s happened, they’re going to be further damaged.’

A Department for Education spokesperson said: ‘Throughout the COVID-19 pandemic our decisions have been based on the best scientific and medical advice, with the welfare of children and staff at the heart of all considerations.

‘We have placed significant emphasis on mental health and wellbeing in our planning framework for the wider opening of schools, and have provided advice for parents and carers on looking after children’s mental health during the outbreak.

‘We have also provided over £100 million to boost remote education, including providing devices to those children who need it most while working with partners to look at what additional measures may be required to ensure every child has the support they need to deal with the impact of coronavirus on their education.’

Don’t snub our open schools: Ministers tell parents that reopening classrooms is safe amid fears many will keep their children away when lessons restart today

Sarah Harris for the Daily Mail

Ministers last night reassured parents that reopening primary schools today is safe amid fears many will keep their children away.

It comes as a study suggested up to half of families may shun sending their youngsters to lessons due to worries about the spread of coronavirus.

The majority of primaries are expected to open from today, despite fierce opposition from the National Education Union. At the 11th hour, the union again attempted to scupper openings, claiming they should be delayed until June 15 to protect youngsters and teachers. 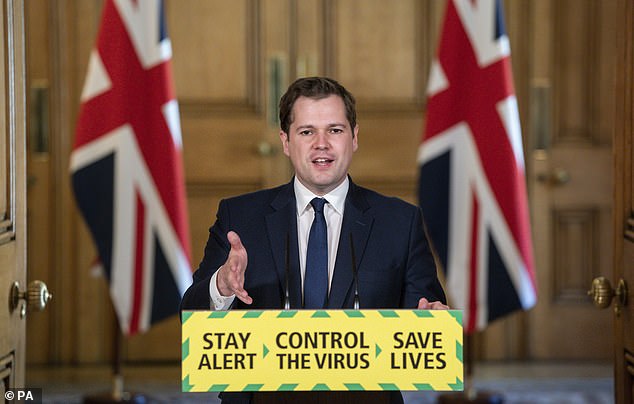 But Education Secretary Gavin Williamson attempted to allay parental and staff concerns, insisting that Government decisions throughout the pandemic are ‘based on the best scientific and medical advice’.

He said: ‘While there might be some nervousness, I want to reassure parents and teachers that the welfare of children and staff continues to be at the heart of all of our considerations.

‘For the past three weeks the sector has been planning and putting protective measures in place.’

Speaking at the Downing Street briefing, Mr Jenrick said ministers believe it is ‘possible to open schools safely’. He pointed out that 80 per cent of schools have been open throughout the pandemic, with thousands of teachers already educating children of key workers as well as vulnerable pupils. 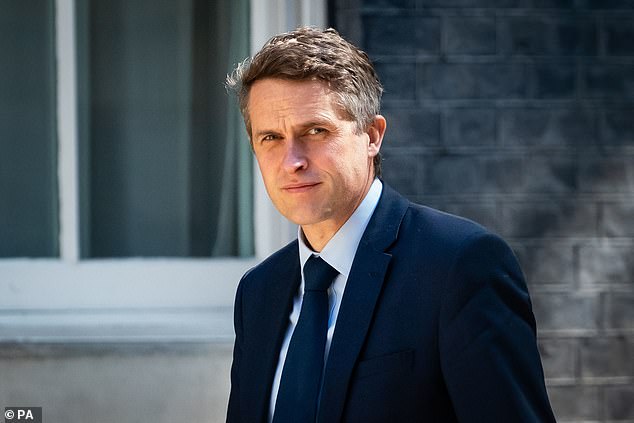 Education Secretary Gavin Williamson attempted to allay parental and staff concerns, insisting that Government decisions throughout the pandemic are ‘based on the best scientific and medical advice’

Mr Jenrick said: ‘It may be that there are some parents out there today who have not yet made the decision to send their children back to school but will do so in the days ahead when they’ve seen other people make that step and schools manage to reopen safely.

‘I certainly hope so, because it’s extremely important that we do get children back to school.

‘All of the evidence suggests that it is children from the most deprived, the poorer households, who are losing out by not having that crucial face-to-face contact that you get in a school setting. I don’t want to see that continue for any longer.’

Government safety measures include returning primary pupils having access to coronavirus testing, along with symptomatic members of their family. They will be kept in small, socially distanced groups of no more than 15 throughout the day, with staggered breaks, lunchtimes, drop-offs and pick-ups.

Dr Jenny Harries, deputy chief medical officer, told the press conference that testing capacity across the country ‘is now very significant’ at up to 200,000 a day. 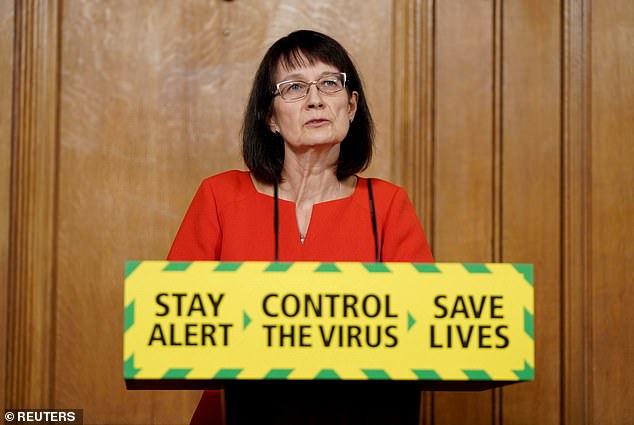 Dr Jenny Harries, deputy chief medical officer, told the press conference that testing capacity across the country ‘is now very significant’ at up to 200,000 a day

She pointed out that the ‘risks of social interactions are reduced’ as pupils will be kept in small groups. Boris Johnson wants nurseries and early years providers to reopen today, and primary schools to allow back their Reception, Year 1 and Year 6 groups.

Some students in Year 10 and 12 will be allowed to meet face-to-face with their teachers at secondary school from June 15.

The majority of primaries are expected to reopen. But many are only admitting a fraction of eligible pupils, with the introduction of rotas, as they struggle to adapt to smaller classes and reduced teacher levels.

They expect nearly half (46 per cent) of families to keep their children at home because of their concerns around coronavirus or the need to self-isolate. The figure is slightly higher for primary schools (47 per cent) compared to 42 per cent in secondary schools.

Across all schools, those with the highest proportion of pupils eligible for free school meals – an indicator of poverty – estimate the figure to be 50 per cent. This compares to 42 per cent in schools which have low levels of disadvantaged students.