Colourful outfits, jazzy production values and a telegenic anchor who, despite technical difficulties, never let her Colgate smile drop once.

Despite the serious nature of the Global Vaccine Summit, there was a welcome hint of Eurovision about proceedings.

Welcome because the virtual conference, which aimed to raise $7.4billion for global vaccines over the next five years, lasted the best part of four hours. Wonderful, wonderful cause and all that, but blow me it dragged on a bit. 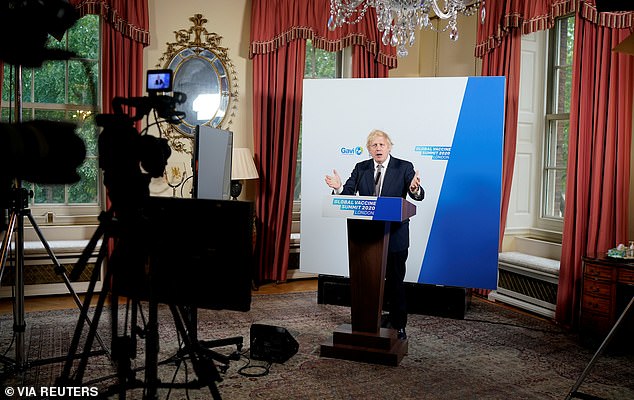 The Global Vaccine Summit (pictured Boris Johnson attending on Zoom from 10 Downing Street), which aimed to raise $7.4billion for global vaccines over the next five years, lasted the best part of four hours

With London due to be the venue before coronavirus hit, Boris Johnson was our host for the day.

Other than a brief opening and closing speech we didn’t see a great deal of him. Jay Gatsby was more prevalent at his own parties.

Things got off to a shaky start when the microphone belonging to presenter Jen Copestake – who appears on the BBC from time to time – failed. For the first few minutes she was completely mute.

Poor Jen had a tough old afternoon linking the various feeds from around the world but she held it together well.

Boris kicked us off, appearing behind a lectern in an unknown location. Naturally, finding a cure for Covid-19 was top of his agenda.

He expressed hope that the summit would be ‘the moment when the world comes together, uniting humanity in the fight against disease’.

He announced the UK was pledging £1.65billion over the next five years, proudly adding this made us the world’s biggest donor to Gavi, as the vaccine alliance is known.

Being Boris, he pronounces Gavi ‘Gavveee’ in that awkward manner Englishmen are prone to adopt when speaking to waiters abroad. 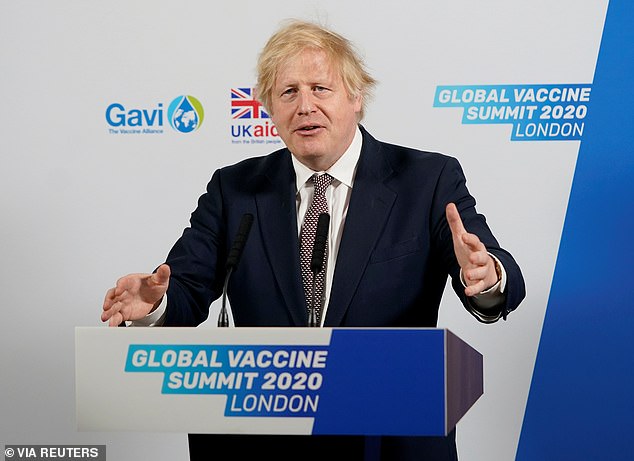 Boris Johnson hoped the summit would be ‘the moment when the world comes together, uniting humanity in the fight against disease’, as finding a Covid-19 cure was top of his agenda

Jen then took us over to Donald Trump in the White House garden. The President was in a relaxed and folksy mood.

You’d never have guessed half of Washington DC had spent the past week trying to kick his front door in.

Mr Trump loves helping out Boris. ‘He said, ‘Could you do something from the Oval Office?’ Why not?

‘It’s right behind me,’ the President explained, motioning at a window. He was so casual it was as though he was appearing in a promotional video for one of his frightful golf courses.

‘It’s great to be partnering with you,’ he waved. ‘Send my regards to Boris. Let’s get the answer!’

Around the globe we journeyed, world leaders pledging their cash to Gavi’s coffers. China, Senegal, Japan.

For the most part, leaders spoke from behind bland desks, with imposing sets of flags perched either side of them.

But I was quite taken with Bangladesh’s softly spoken Prime Minister Sheikh Hasina, who delivered her message against a backdrop of a magnificent looking paddy field. 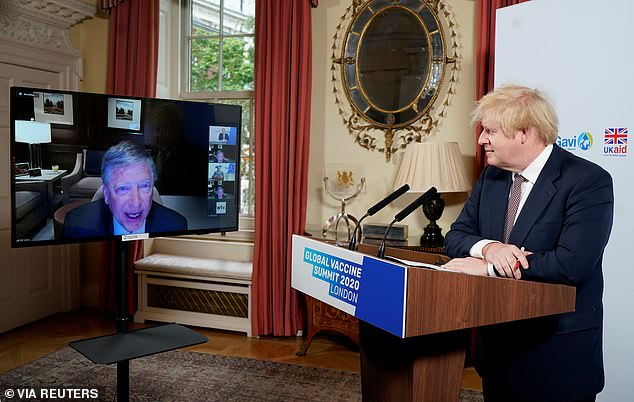 ‘Take a bow everybody’: The grand total raised for the afternoon was $8.8billion dollars, comfortably beyond what they’d hoped

Everyone was on first name terms with the PM.

‘Thank you Boris!’ boomed Ghana’s baritone President Nana Akufo-Addo, who gave thanks for the PM’s recovery from illness.

Some of Africa’s leaders got the posh sounding French translator in a right tangle. She was unable to decipher anything the representative from Burkina Faso was saying.

Emmanuel Macron gave an energetic speech, pledging 500million euros of French dosh. Such an eager little beaver, Macron. No public platform too small for him to witter on from.

Quite unlike Angela Merkel, who spoke in a sullen monotone. She seemed fed up. Demob, perhaps. Frau Frump’s due to go next year. I’m not convinced she hadn’t given herself a DIY haircut.

After three and a half hours of this self-congratulatory statesmanship, Boris was back at his podium to announce the final pledge. Drum roll.

Grand total raised for the afternoon was $8.8billion dollars, comfortably beyond what they’d hoped.

‘Take a bow everybody,’ said Boris. For a minute, I half thought shiny ticker tape might start raining down from the ceiling followed by a performance from some syrupy rock band. Coldplay, perhaps. Or U2 twit Bono.

Instead, there was an abrupt goodbye from Jen and the feed went dead.