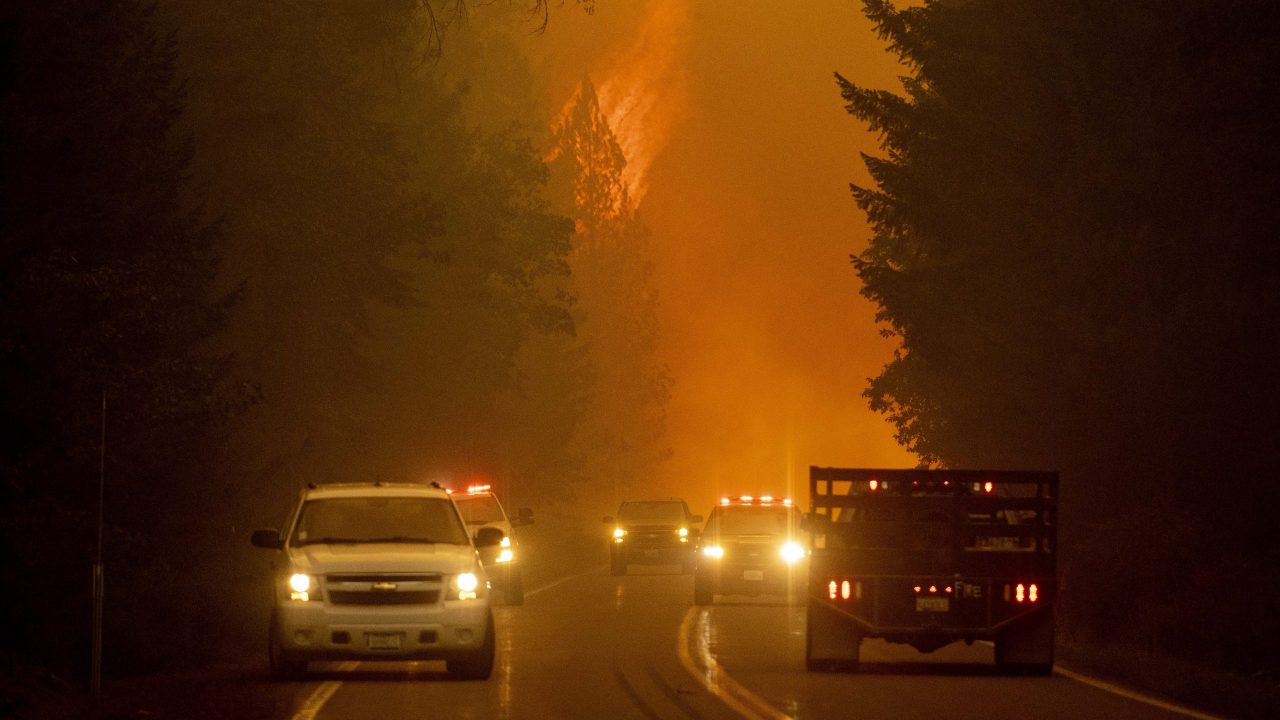 Firefighters monitor the scene as flames from the Dixie fire jump across highway 89 near Greenville, California on August 3, 2021. – The Dixie fire has burned more than 250,000 acres and continues to get closer to residential communities. The 2017 Thomas Fire is now only the seventh worst by area destroyed — and is likely to be overtaken soon by the Dixie Fire raging through the state’s northern forests, as climate change makes wildfire season longer, hotter and more devastating. (Photo by JOSH EDELSON / AFP)

A vast wildfire in northern California, already the third-largest in the state’s history, continued to grow overnight but officials said Saturday that cooler, calmer weather was giving firefighters a much-needed break.

The Dixie Fire has now ravaged 446,723 acres in four counties, up from the previous day’s 434,813. That area is larger than Los Angeles — and has surpassed the sweep of the vast Bootleg Fire in southern Oregon.

But cooler temperatures and calmer winds moved into the area overnight in a boon to weary firefighters, the state agency Calfire said. Those conditions are expected to continue into Sunday.

The fire is now 21 percent contained.

Earlier in the week, the Dixie Fire left the Gold Rush town of Greenville charred and in ruins, though no deaths were reported. It has also burned through the small town of Canyondam, the Los Angeles Times reported.

The Times said that as authorities urge thousands of locals to evacuate, they have been met at times by armed residents refusing to budge.

When that happens, law enforcement officers are asking the residents for the names of next-of-kin — to be notified if the fire claims their lives.

Ironically, the Dixie Fire’s movement northeastward has been slowed in part because it has reached what the CalFire website calls the “scar” of an earlier blaze, the 2007 Moonlight Fire, reducing available fuel.

More than 5,000 personnel are now battling the Dixie blaze, which is sending enormous clouds of smoke into the air that are easily visible from space.

By late July, the number of acres burned in California was up more than 250 percent from 2020 — itself the worst year of wildfires in the state’s modern history.

A long-term drought that scientists say is driven by climate change has left much of the western United States parched — and vulnerable to explosive and highly destructive fires.