The exploits of Jack Leslie have been passed on down the generations in Devon for the best part of a century.

Leslie scored goals by the boatload in days when Plymouth Argyle were an ambitious club with eyes on the top flight until the Second World War changed everything.

His legend is secure at Home Park where they named the boardroom in his honour last year but the tale which endures even further afield concerns the time he was about to be picked for England only to miss out when the selectors discovered he was black. 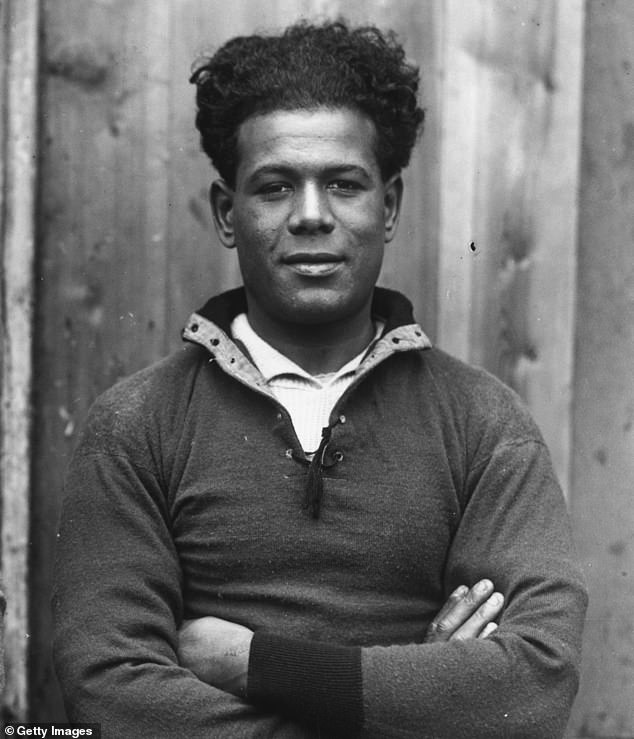 West Ham’s players of the Seventies were familiar with it. They came to know Leslie when he worked in his later years in the boot room at Upton Park and recall his gentle presence and fondness for a cigarette.

And the legend is set to receive further acclaim, with a statue campaign launched this year and gathering support.

Leslie’s story was first told by sports writer Brian James in the Daily Mail in 1978, soon after Viv Anderson became the first black footballer to play for England, making his debut against Czechoslovakia.

In the interview Leslie recalled how Plymouth manager Bob Jack took him aside one day in 1925 and told him the selection committee had been in touch and wanted him to play for England. 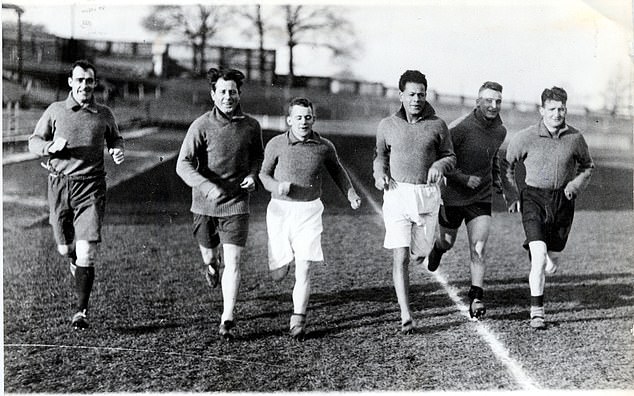 ‘Well, can you imagine,’ said Leslie. ‘Everybody in the club knew about it. The town was full of it. It was quite a thing for a little club like Plymouth. I was proud.’

But the excitement soon dwindled. ‘All of a sudden everyone stopped talking about it,’ he added. ‘Sort of went dead quiet. Didn’t look me in the eye.

‘Then the papers came out a day or so later and Billy Walker of Aston Villa was in the team, not me. I didn’t ask outright. I could see by their faces it was awkward. But I did hear that the FA had come to have another look at me. Not at my football but at my face. I suppose they thought that was like finding out I was foreign.’

Leslie was born in Canning Town in 1901, the son of a Jamaican father, and played for Barking Town until his move to Plymouth at the age of 20, one of three players to leave Barking for Argyle who had recently been elected to the Football League. 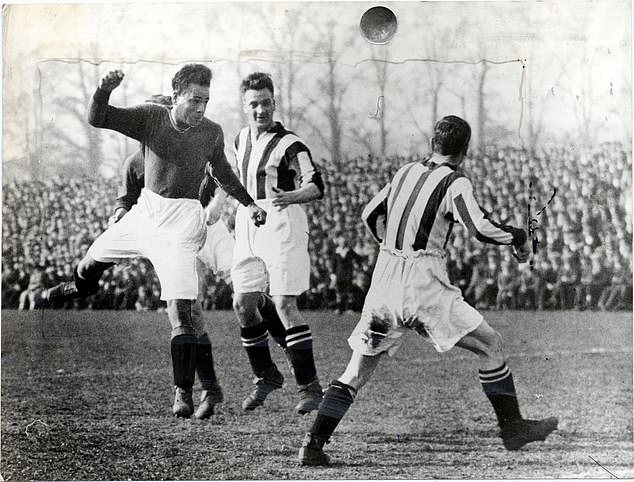 Leslie was born in Canning Town, London, in 1901 and was the son of a Jamaican father

As an inside left, he forged a prolific partnership at Home Park with outside left Sammy Black – although he sometimes appeared at centre half – during a successful decade for the club.

For six years in a row they were runners-up in Division Three (South) – they even toured in Argentina – and finally won promotion as champions in 1930. By way of celebration a giant pasty was carried on to the pitch before the final game of the season against Watford and presented to their captain, former England full back Fred Titmuss.

In Division Two, Argyle could attract crowds of more than 30,000. The Plymouth Herald described Leslie as ‘a versatile player’ who was ‘known throughout England for his skill and complexion’.

Everton tried to sign both him and Black but Leslie would spend his entire career at Argyle, where he made 401 appearances and is the fourth highest scorer of all time with 137 goals, the last of them against Fulham in 1934.

‘He is a hugely important figure at Home Park,’ said Plymouth’s head of communications Rick Cowdery. ‘Ninth in the list of all-time appearance makers and always a torch-bearer for diversity and inclusion.

‘Since I joined Argyle more than 30 years ago I’ve heard the story of his England call-up. We are 100 per cent behind anything anyone can do to honour Jack. It is a tale of regret because he missed the chance to play for England but also of hope because society can change and has changed.’

No documentary evidence exists to verify the story of his England snub either at the FA or Argyle. Home Park was destroyed when Plymouth was blitzed in the war.

Some historians of the club claim Leslie’s physical stature counted against him as well as his colour, yet the man himself was in no doubt. An example from another sport illustrates the extreme prejudice which black sportsmen fought against at the start of the 20th century. 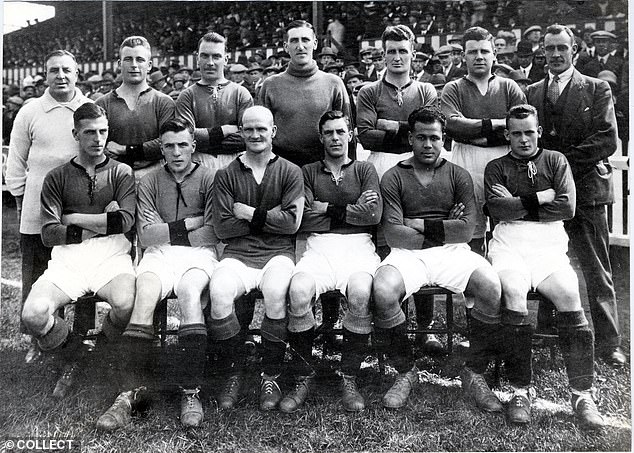 Leslie, who is ninth in Plymouth’s list of appearance-makers, poses for a team photograph

James ‘Darkie’ Peters, England’s first black rugby union international, played for Plymouth and was set to represent Devon against South Africa in 1906 when the tourists noticed his colour and refused to play.

Only the intervention of the South African High Commissioner, who was advised the 20,000 crowd inside the Plymouth County Ground were likely to riot if they did not see a game, persuaded them to go ahead.

Six weeks later and Peters, hailed as the best fly-half in the country, was withdrawn from the England squad to face South Africa because of their objections.

On the case of Leslie, FA chairman Greg Clarke said: ‘Stories like this are incredibly sad. Discrimination in the game, in any form or from any time period, is unacceptable. We must always remember pioneers like Jack Leslie and be thankful that football is in a very different place today. We are very pleased to support this campaign which will hopefully ensure that Jack’s career is appropriately recognised.’ 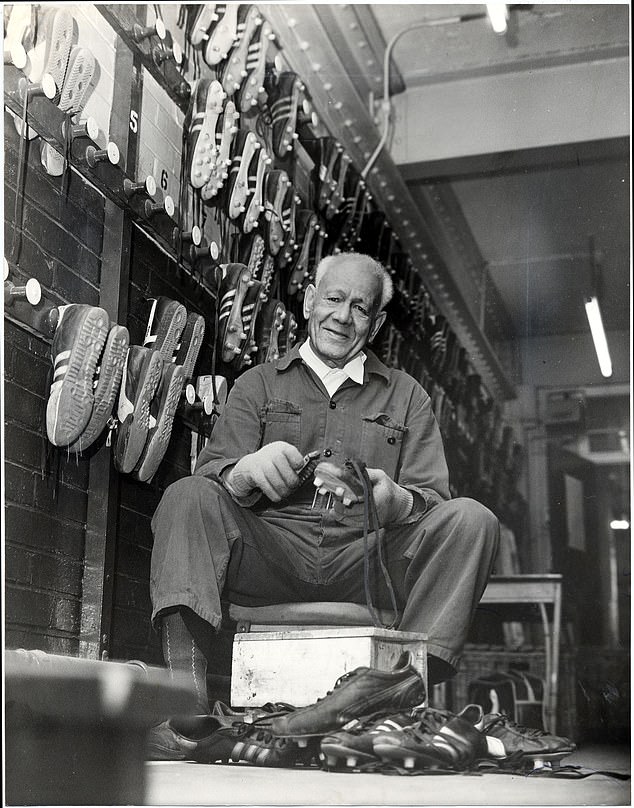 Leslie ran a pub in Truro, Cornwall when his playing career was over before returning to his East London roots to work as a boilermaker. He joined the ground staff at West Ham at the age of 70, working on the terraces and later with a role in the boot room.

‘Jack was already part of the furniture at Upton Park when I arrived,’ said Alvin Martin, who spent 22 years with the club from 1974. ‘He was reserved and quite shy but he was a lovely man.

‘John Lyall always found time for him and would treat him with a lot of respect. John knew he’d been one hell of a player and made sure all the boys knew that as well.’

Leslie retired aged 80 with TV cameras in the dressing room to film his final day at work. He died in 1988 at the age of 87 without any formal recognition of him as a pioneering black footballer.

Perhaps it is time for that to change.